The most beautiful palace of Szeged 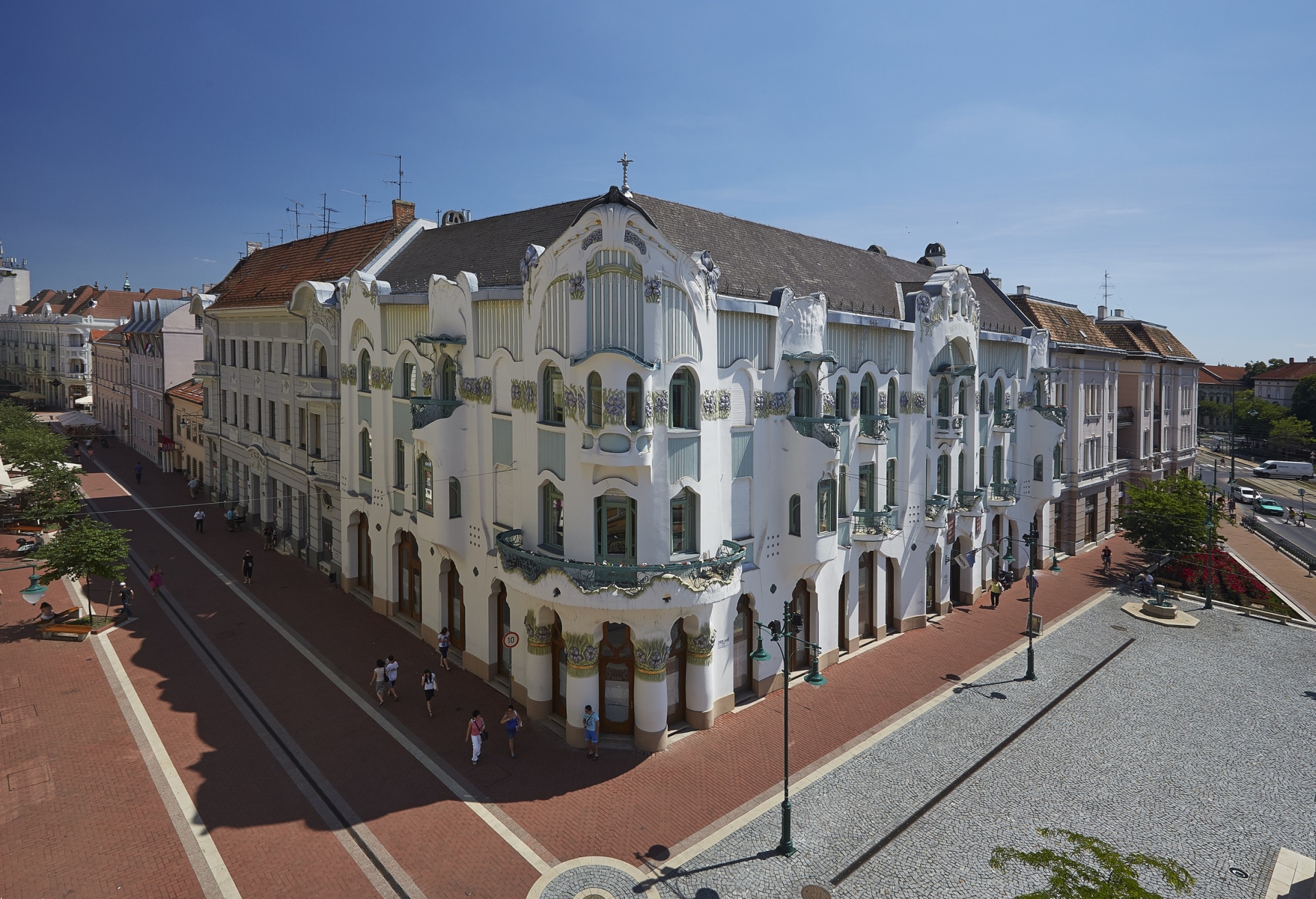 Read about the history and architecture of Szeged's one of a kind building, Reök-palace.

On the corner of Lajos Tisza boulevard and Kölcsey street in Szeged stands one of the most unique works of Hungarian Art Nouveau. Built in the style that foreign literature labels “Hungarian Jugendstil”, the house was designed by Ede Magyar, and completed in 1907. Akin to the residential buildings designed by the Catalan artist Antoni Gaudí, it is one of the most beautiful ones in Europe.

It is indeed a rare treasure that Szeged owns. The family mansion that has been standing in the heart of the city for a century now – resisting wars and changes of the regime – is of outstanding, special value even in European terms. Its builder, Ede Magyar, who died prematurely at the age of 35, was determined, brave and talented enough to defy the conservative Hungarian climate, and connect his hometown to Europe. He brought to Szeged a European development that not only saturated the architecture of the time with its innovative ideas, but also initiated a new approach in other art forms. Although Hungarian architecture at that time already reflected–inSzegedaswell–someelementsofthenew approaches and endeavors, Magyar’s youthful and dedicated energy, his European experience was necessary for the construction of this unique building in Szeged, which seemed bold and surprising, even to the followers of Art Nouveau.

As Art Nouveau became more and more popular in Europe – opposed to the still flourishingandwidelyaccepted eclecticism – it gained followers in Hungary as well. The work of certain groups or schools (Lechner, Medgyaszay, Károly Kós and the “group of the young”, etc.) is essential to the history of Hungarian architecture. Ödön Lechner (1845–1914) is probably the most widely known and most influentialarchitectofHungarianArtNouveau. He was an innovator of style, and developed the Hungarian formal idiom of Art Nouveau. Although Lechner also worked in Szeged, it is not his influenceone might observe on the design of the Reök palace, but rather that of the French and Belgian Art Nouveau, that Magyar had studied in Paris. This rare school of Hungarian Art Nouveau includes only a few buildings in Budapest – especially those designed by Emil Vidor – and this mansion. Apart from its stylistic innovations, the building is of special value also because it was constructed simultaneously with similar buildings in major European cities.

It was Tibor Bakonyi (1934–1982), an architect living in Szeged, who “discovered” the house in the 1970s. With unflaggingpassionhestudiedthehistory and the past of the house’s designer, Ede Magyar, and of its commissioner, hydraulic engineer Iván Reök (1855–1923).1 Based on Bakonyi’s research we will present a short history of the builder and the commissioner, as well as give a description of the building (Tibor Bakonyi: Ede Magyar. Gyorsjelentés Kiadó, Budapest, 1995, translated by Tamás Érdi).

Ede Magyar was born at Orosháza, on 31 January, 1887. He was the third child of the family and three years old when the family assumed the surname Magyar. In 1901 Ede Magyar obtained his qualificationas master-builder in the Budapest State College for builders. During his student years he made several trips abroad. Paris was his favorite destination.

After his study trips he mainly worked in Szeged. In the years following the turn of the century, the building industry was still flourishingasaresultoftheeco­nomic prosperity following the Austrian–Hungarian compromise of 1867, so Ede Magyar embarked on his career at a fortunate time. His work as an archi­tect is known from 1904. He was twenty-nine when he was commissioned to design the Reök palace. Even today it is considered a rare opportunity for an archi­tect to be commissioned by a fellow countryman who not only shares the same views, but also trusts him to such an extent that he can carry out his ideas with full devotion and passion.

Authorization plans for the building were submitted on 2 July, 1906 to the Committee for City Architecture. The submitted drawings almost entirely correspond to the actual ground plan of the building, although the drawings, while truly reflectingfenestrationandthe doors, demonstrated neo-Baroque details and articulated parts of the façade.2 The building was completed to exacting standards in November 1907, in only one and a half years, mostly with the collaboration of local artists and artisans. The plan of the house reflectsthe requirements of the commissioning family: Iván Reök asked for a bachelor flatoneachstoreyforeachofhistwosons, and two-two flatswithmoreroomsoneachstoreyfor his daughters. The grouping of the flatsandtheirlayout are up to date and even ingenious. On the ground floor corner a restaurant was opened, while the rest of the spaces were rented by craftsmen and shopkeepers. To the left of the entrance Ede Magyar set up his own architectural studio.

The small square in front of the Reök palace adds to the cityscape effect of the building. The supple elevations of this three-storey corner house, shaped by almost sculptural means, excite the curiosity of the spectator from far away. The most emphasized part of the main façade is the corner, markedly articulated by balconies, bay windows and the high crenellation. The undulating walls, its magical flower-shapedornamentsmake it diverse, but being in complete unity with the architectural tectonics, also suggest balance. The rhythm of the façade’s articulation is remarkably ingenious, too: it emphasizes the main entrance and the corner turning simultaneously (Bakonyi 1995:17).

Magyar’s daring and freshness, the richness of ornament, the overall symbolism still to be deciphered evokes admiration and amazement even today. We agree with the statement of his enthusiastic researcher, Bakonyi, that such perfection of form, transubstantiation of floraldesign into structural elements, such exquisite modeling of pilaster- and column capitals transformed from floraldecorationsisallbutmatchless in the Art Nouveau movement. (Bakonyi 1995:18) Magyar’s associate, János Takács, recalls very accurately the circumstances of the building’s unusual modelling:

“The undulating shape of the walls is essential. The façade is comparable to a relief picturing the serene tranquillity of a lakeside, avoiding distinct lines. Bow windows with their soft shadows, the swelling supports of the balconies, the undulating forms of the pilaster strips, column shafts and gables, all these are composed of motifs of water-weed adapting themselves to a water-side scenery.” (Bakonyi 1995:19)

The panels under the overhanging cornice had been decorated with seccoes of water-nymphs, however, the more conservative ladies of the family soon let them be scraped off. On the interior of the building Bakonyi passionately writes:

“The stylized vegetable details applied to the front continue in the staircase. The creeper pattern springing from the root runs up on the wrought iron rod and bursts into a flower.Onthegrid-panelslilies, budding and full-blown, can be seen, giving an upward throbbing, spinning impression. A glance in the stair well reveals full-blown lilies everywhere, and this makes communication in the staircase in every direction a delightful experience. The wrought iron works of rare beauty on the building were made by Pál Fekete after Ede Magyar’s drawings. Pál Fekete (1873–1908) a Szeged metal-worker artist-craftsman, was one of the domestic masters of smithcraft blessed with fineformalinvention.

Every window of the staircase has a distinct subdivision, the thin saddle bars suggest floraldecorations.Theupward-swellingcalligraphies of the repeated strapwork-components, running along the stairs, add to the magic of the staircase.” (Bakonyi 1995:20)

Bakonyi suggests that the two horse-heads above the main entrance, composed into the tympanum, are an allusion to the owner’s horse-breeding hobby, while the bird on top of the corner refers to the one-time Fekete Sas (Black Eagle) street. By creating the Reök mansion in Szeged, Ede Magyar established his reputa­tion. Now he received one commission after the other. In 1909 he won a national competition to design the Kaposvár theatre, accommodating 1400 people. The building began in January 1910, and already in April 1911 the reinforced con­crete structure was tested. Contemporary press reported the inauguration of the building on 2 September as “A masterpiece of Szeged architects”.

His tragically short but nonetheless important oeuvre places Magyar among the most outstanding architects of Hungarian Art Nouveau. He is among those artists who immediately adopted the new spirit and the ideas, the modern approach as the new trends developed in Europe. The char­acteristic modelling of the Reök palace is unique in Hungary. Its composi-tional methods and plastic inventions are matchless in Europe as well. Art Nouveau, in architecture as well as in applied arts, brought content and form closer to each other, and resulted in a new stylistic unity. Designing either articles for everyday use, or buildings, the starting point was function, which was then modelled after forms found in nature, in the floralworld.Specialistsofthehistoryofarchitecturetracebackthearchitectural forms of Art Nouveau to the paintings of William Blake (1757–1827). Bakonyi cites an article by the British art historian of Irish origin, Edwin Johnston, on Magyar’s building:

“The enormous curvilinear balconies and the vegetable details meet at the projection of the street corner in an irregular jaw frontispiece, which is a remote image of William Blake’s God Almighty.” (Bakonyi 1995:17)

One of the most interesting, most original artists of Art Nouveau was the Catalan architect Antoni Gaudí (1852–1926), who made the best of the workings of fantasy. Indeed, the Reök palace might call his famous Barcelona buildings to mind, the Casa Batlló or the Casa Milà, built around the same time as the building in Szeged. One findssimilaritiesboth in the façade and in the details of the interiors. Both Magyar and Gaudí owe much to the buildings designed by the Brussels architect Victor Horta. His well-known building in Brussels, the Tassel palace (1893) could have been their model, or the special spatial design, and the details of the lobby and the staircases in Horta’s own house, built in 1898–1900. As a French inspiration we need to mention here Hector Guimard (1867–1942), who exerted great influenceonhis contemporaries through his best known works for the 1900 World Exhibition, such as the famous entrances to the Metro stations in Paris and his ornate staircases. Both Horta and Guimard use expressive forms, rich details, and dynamic surfaces.

In the second part of the 20th century the Reök palace has undergone several reconstructions and renovations, but luckily, these did not diminish the value of the building or make irreversible alterations. After recent renovations, the former city palace reveals even more of its merits. Now not only the ground floorspaces,buttheupperfloorsarealsoopentothepublic.Therenovatedpalace will become a new venue for the art-loving public of Szeged. The hundred-year-old Art Nouveau palace opens its doors in August 2007. Tamás Herczeg, director of Reök, a former inhabitant of the building launches the program series in there with the same passion that characterized the creators of the palace. The Reök palace – Regional Arts Centre will try to fulfillmultifunctionalculturalpurposes, such as hosting the city’s art gallery. It opens with the exhibition “Beauty and Pain”.

Video of Reök-palace and Open-Air Festival of Szeged: